If something we have discovered so far in the United States is that the different
states have nothing to do with each other, or even more: it seems that going
from one to another, we had change the country… laws, and also the people
change totally.
This has made us think (on the bicycle we have plenty of time for thinking)
that, as USA was actually formed by immigrants coming from different
countries, they end up settleling in different areas, separating between each
other and maybe that’s why this amazing differences.

It has been surprising and interesting to have not found the north America
that we had in our imagination, the one with just hotdogs and burgers, flags and
4 x 4 drived by people with big bellies… well, there is some of that but till now
it has been the exception. 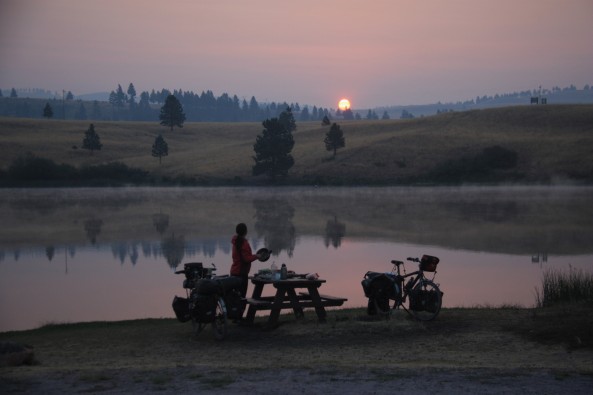 The biggest surprises for us was to see that some gyms open 24 hours and also
big supermarkets; that the 90% of the homeless have mental health problems and
they are in the street, or that is common to rent warehouses (something like garages)
to keep the extra things that people have and so not fit in their houses…

Something to say also is that their way to speak in English is much more fun
and nice than the rest of the english speaking countries. One day, drinking a coffee
with a guy he said something like…
“About the english, well, the British made it necessary but the Americans did it cool”

We crossed over from Canada to Montana and although we changed the country, we
did not found almost any change, the only that we felt was that the land was getting
dryer and the cows appear at the same time than the mosquitoes and the bears
became an history of the past; but the very best…. the bisons!!! that’s something
to see but… without approaching very much. 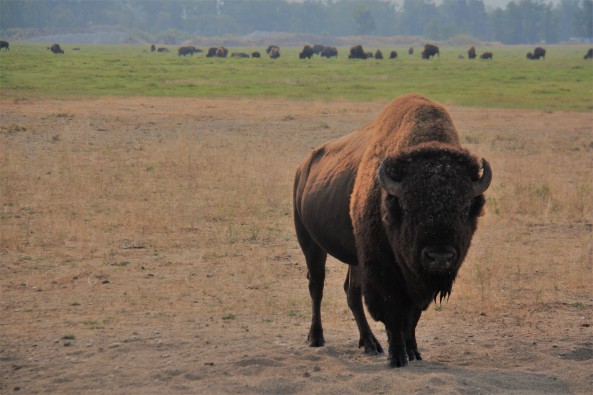 Also areas with more population and, suddenly, without expecting it at all… we
were innersed in the purest “far West”, like in the films… old and large cars, old
pickup trucks, cowboys and boots, hats and shirts tied up to the last button above,
and even spurs!!, more than one reminds us exactly to “Lucky luke”.

“Have a Safe day”… It is the most common way in wich they greet us.
“And you a happy day”… we wish them back.
We had realize by that way to greet that safety is something that they have very
present in their daily lives, maybe… too much… maybe again…
the political exploitation of fear is working properly.

Heat, heat and many fires.

We also find the first “Amihs”: they are a special sect, characterized by the way
they dress, in the 18th century style, and its resistance to use modern technologies,
starting with television and many, even refuse to use the car.
Being among them makes us taste what would be to travel in time.
Humble, simple, and also somehow distant.

In Idaho the Sun literally begins to hurt, we can feel totally that we are moving
to the South in a straight line and the climate changes little by little.
We are on roads between rocky mountains where,
Beautifull and solitary roads, mountains and rocks, nature, much more than
we expected.

The visit to Yellowstone wasn’t bad, the geysers were amazing
but… honestly… as we were coming through Yukon State and still he had fresh
in our minds the Rocky Mountains and the area of Jasper National Park… it didn’t
seems nothing really special for us, even more; as it was there so many people
and cars… we just wanted to leave to another place!!!.

Utah surprised us by how little we knew of this State which is the home of the
Mormons, a place where alcohol is forbidden and where the people even do not
drink coffee. A place also where we had found an amazing hospitality, so much
that we had never imagined to find in this part of the world.

Many prejudices still continue to obscure our vision of the world!!!!

In Salt Lake City Steve and his wife received us in their house with all the
possible kidness, and honors, 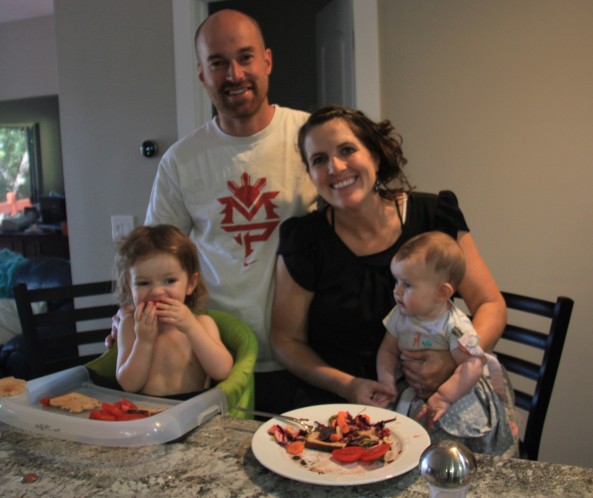 upon arrival they had the Jacuzzi “on” at the terrace waiting for us, in a place
with a great overlooking of the city.
We met them in Alaska; they were travelling in a caravan with their babes and
offered us coffee and scones when we arrived sweat and tired just to the site
where they were parked. There, they offered also, after a talk, their house,
openly and honestly; an amazing couple. They were also traveling right before
having their girls with backpack and still they are doing, in a different way now.

We decided to make a stop along the way, the coast California and especially
the giant Sequoia were “calling us out” and… having the opportunity of
leave all the things at our friends house… we decided to visit the coast.

How? well… this is an amazing history, unexpected, unbelievable, exemplary
and beautiful.
We met Josh, a boy from the San Francisco area in the house of a
“warmshowers.org” member (the space of Internet where people offered their
homes to others travelling by bicycle).

We stayed three days together, hosted by the same person and… talking about
the coast and how much we would like to visit there, he offered his car. As his
trip was going to last a few months, he did not need it.

Of course we accept.

So we rode the coast and took a break from the bike.
Sequoias can only be compared to our looks, to the Baobabs…. it is not what you
see… it is what you feel, it is not the beauty… it is rather its presence which impacts,
which leave you in silence… pure magic.

This stop left a mark on both of us, it has not been just a break but… a turning
point, there is a before and after… nothing… will be the same for either of us.

But that… we will explain you in the next update of the blog, we leave it for that one
because this is… already long enough.