As we were told, we can not cross the border with fruit or vegetables so we sat down to eat all the carrots and apples that we have before entering the office of the Canadian side. It seems that they make you questions before to stamp the visa on the passport.

A policeman about 40 years old made us a lot of questions… where are you going?, how long will you be in the country?, where are you coming from?, do you have weapons?, what is your profession?, how can you affore this trip?, do you have web or blog or something on the net?, and interviews…?, They didn´t check our saddlebags. It seems that we have passed the test, stamp in the passport and visa of 6 months.

We enter into the State of the Yukon, which according to what we are told, is the State that the Government of Canada gave back to the native Americans (which here are called “first nations”) in compensation for all damage, all the pain and injustice caused to them. It is much more pure and wild lands that in other States, Here the Native Americans are the ones who put the rules and make the law. 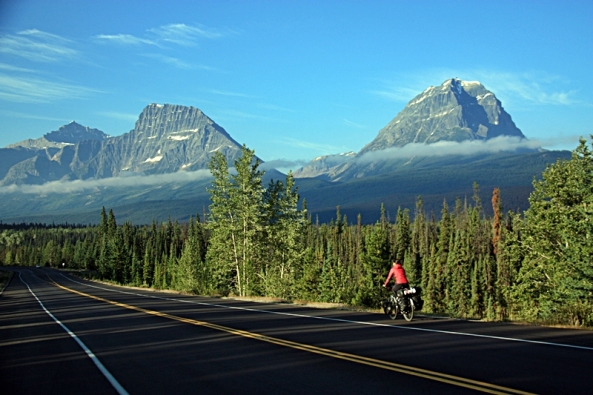 Just after crossing the border to our right, after the plain, appears a huge corridor between two mountains becaming a natural gate for the animals migrations, particularly birds and caribou. Beautiful entrance to the country, also we discover something; always we thought that the area that once was totally frozen and impossible to pass to humans, was between alaska and Russia but… no, really it was in this place exactly; between canada and alaska, so that is why Alaska once was part of Russiaand not American. We were speechless.

The changes begin. The main is that the soil is much less humid and as a result, the firs are large, healthy and resistant, the branches are fatter and that is a joy for us: it facilitates us the work of having to hang the panniers, now there are many more options.

We are going down to the Southeast and the more south, we find more species of trees, plants and flowers; also animals: we have found, on the road, having his morning stroll coyotes and even a Lynx which have kept quiet when we stopped beside her, and continued as a meek kitten, even it looked at us in the eyes for a moment.

These are those moments that are worth their weight in gold, that worth all the effort we made, all of the hard times… that wild and peaceful look stuck in yours, in the middle of this explosion of nature at its purest it makes everything worthwhile and makes you feel part of the world, part of whole, alive!

The evenings-nights are spectacular. Imagine that this magical half hour preceding the sunset when colors change and become warmer, when the sky, the Sun and all that surroundings take a special beauty… imagine a place in which that last for hours and hours… so that happens here every day, the nights are eternal sunsets.

During the day the light is also different, it has a brightness so intense that to take a nice picture is impossible.

Kilometres and kilometres of wilderness, natural, in its purest state; no traces of human beings. Barely anyone puts a foot in these endless forests, only the “trappers” hunters who use traps, but those get deep in the Woods on foot (sometimes for remote areas using a small plane or helicopter) and leave no trace of their way. They are integrated in the natura so thay know and can survive in it, already are few, are a race in extinction but still there are and both of us dream of meeting one of them being able to share time with him.

Forests, glaciers, mountains, lakes… that must have been the world one day.

We bath in rivers and camp near them, we live now more than ever outside of time, which, if in the normality of our days the watch is unecessary, now that the light is constant… it is completely useless, the evening does not arrive and we can ride at any time, until we want.

One of the days we did it, we couldn´t go to the South without tasting what is cycling the whole night… again, that Word… There is no other that can define it… magic.

Appear the first bears on the side of road, we were anxious and also restless, we don’t carry the spray (spray anti-bears) and many people told us almost always horrors but… most importantly and what most reassuring is to know that we are not their food.

It was in Africa where we learned that the animals if you respect them, they (again if you are not their food) will respect you too; you have to know them, know what to do and above all, what to do in their presence: that is the key.

(Already we sheared all the people told us about the behavior with the bears in the previous blog entry: Alaska.) That is why we prefer to use this space to tell you new things and not to repeat what has already been written.)

When we are cycling and meet one, we stop and we stand to ground at a distance enough to not get nervous, then we usually look, from the distance. We speak to it, we wave the arms to the air, placed always close to the bikes to look very large; As if the bike and we were the same thing. It usually takes no more than 30 seconds to turn around and get lost inside the forest; Sometimes they leave quietly, others run, occasionally they turn to look at us again, rising on their two legs, then continue the march.

The Grizzleis are much larger than the blacks (which are the most abundant) and that makes them not frighten and therefore do not leave if they see us… the thing with them usually takes a while, here it’s all a matter of patience , to give them their time and not to try to push.

Honestly, scares; It makes the adrenaline shoot but at the same time and again, it makes us feel very alive, present and of course: in direct contact with life.

In Whithehorse, the first Canadian city, we enjoyed walks, good and abundant food and the hospitality of a friendly couple who hosted us again through warmshowers.org. Finally a break of a couple of days, hot shower and soft bed!!. The body appreciates it although we on the third day in the morning are eager to finish packing everything to be able to go out there again.

And it is a huge pleasure to cycle these lands. The only thing that is tough for us every day, is having to hang the saddlebags: to find the tree that has the branches high enough and strong to withstand the weight, besides, they can not be hang close to the trunk otherwise the black bears could the tree and get them so, the branch… can not be any, the thing needs certain requirements. Then, once selected you have to enter the dense foliage and once there, throw the rope with our huge lock (which is tied the tip of the rope: is the one we use for the chain of iron with strong and fat links to lock the bikes when it is necessary) for the exact spot and then…. drops through the other side of the branch. We tie the saddlebag, pull the rope up and… there are, almost all our panniers, until the next morning. Aitor is a machine in terms of aim and thanks to him this is possible and every day, although sometimes it takes a while and has had to climb to more than one tree, the thing ends in triumph.

The rains are catching us and they are the ones that mark the daily rhythms. We didn’t expect them at this time of year but… here they are, and we have to deal with them with as much philosophy as possible.

The main thing is to keep the tent and the sleeping bags dry, that’s the basics, the most important thing of the day. If the sun comes up for a while you have to stop and hang everything that is wet to dry. Here, now, it is not so much about going on but the surviving, to cope with what is happening, the kilometres are secondary.

“In these lonely places, of so much nature and so few humans, the little things make great differences” – commented Aitor at night, before sleeping-“having a cookie or two to deep in the coffee, finding a place with a roof even if there are no walls where you can cook relaxed knowing that you are not going to get wet, having water to know that you can cook the breakfast and you will not start the day with empty stomach the next morning: that is here quality of life ” 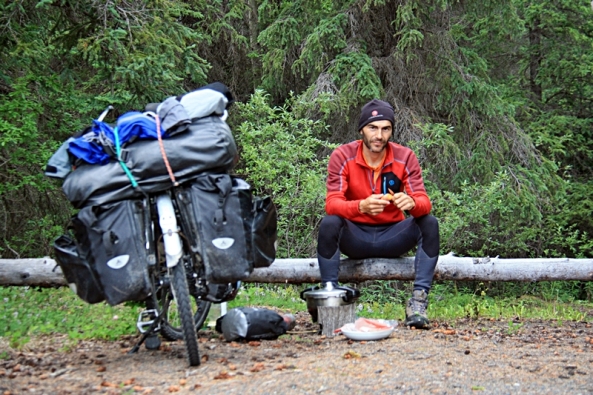 We see many Mooses daily, at first we thought they like to swim in the lakes, then we looked at that diving and also for long periods of time; In a tourist information center (which by the way here are very good quality, have Internet, free coffee and always very friendly people) explained to us that what they do is eat the algae from the bottom, which are very nutritious and… it seems that they love it.

In Watson Lake we are hosted by two sisters and their daughter, they are Mexican and spent a couple of days with them, feeling totally at home and adding new friends that, with sadness, we have to leave them behind. At the same time we are so happy knowing that we are going to cycle the Cassier Higway of which we have both spoken and heard about.

As they said it is beautiful and even wilder, especially in the subject of bears: many more especially black.

Adrenaline and joy, peace and calm, effort and gratification, nature and life, life!, every day a celebration.

There is always so much to tell!, we try to summarize, get to the point, we remove from the middle interesting talks and exciting moments, visions, details, meetings…. so that this does not lengthen much but… there is so much, so much! That a blog is not enough, even they photos are not enough; Not when the beauty of the place occupies the 360 º, or when the glacier is so big that you do as you do… does not fit in the photo.

We tried it anyway, for, even if it is a little we share something of what we saw and lived in these lands of the north.

We can not finish without at least mentioning the stunning beauty of the Rocky Mountains… was entering Jasper… spectacular!: Again that feeling of being tiny like an ant, these landscapes leave us in a deep physical and mental silence, and we appreciate the asphalt because it allows us not to have to look the road to advance and we can roll looking all the time the peaks, to which one could remain observing eternally.

We also find in this area of the Rockies some Elk, (which we had not seen until now) and we cool down in one of the lakes that normally, in this more touristic area often have next to it a state campground, which by the way, are not bad; They are usually simple and cheap and although we usually use them to stop at the middle of the day to eat; We have already made three or four exceptions camping in them but, usually doing it is absurd, Canada itself, and so far, is like a huge campground. 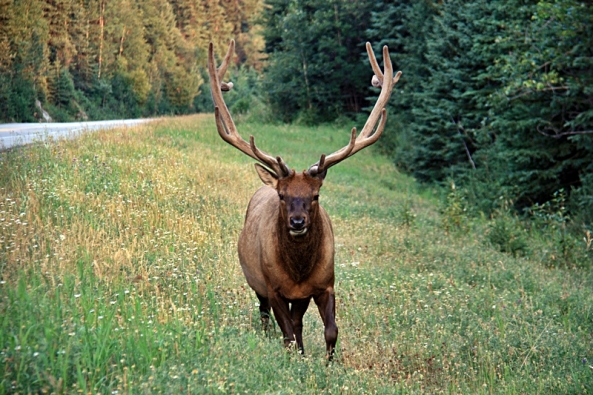